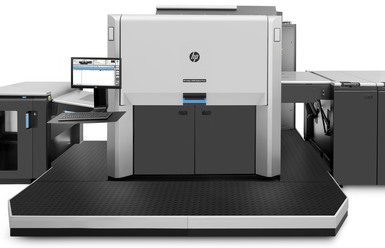 Crescent Press has invested £1.5m to bolster its digital printing

Crescent Press has invested £1.5m to bolster its digital printing and finishing facilities, which included the installation of an HP Indigo 12000 and five Horizon systems.

Taken on at the start of April, the circa £1m Indigo replaced an aging B2 litho press at the commercial printer’s Solihull base.

Prior to 2013, the firm’s offering purely consisted of litho, so the Indigo represents a further foray into digital work for Crescent, which already runs three HP Latex presses up to 3.2m-wide, an EFI Vutek superwide printer, a Ricoh Pro C7100 and a Zünd digital cutting table.

Managing director Andy Matthews said: “While looking for a digital B2 press, we recognised that HP Indigo and Fujifilm Jet Press are the two major names in that field. After viewing demos for both, we felt more at ease with the Indigo.

“Geographically, there is not really anyone in our region offering digital B2 work so that was one of the main driving factors to give us this edge.”

To support the Indigo installation, five different Horizon machines were installed by Intelligent Finishing Systems (IFS) across April and May to replace traditional finishing equipment and also to expand Crescent’s capabilities: a 6,000bph StitchLiner MKIII, a 3,240sph Smartslitter multifinishing line, a BQ-270v perfect binder, an HT-30 three-side trimmer and a CRF creaser-folder.

“The Horizon equipment, together with the HP Indigo 12000, all feature full automation to give the highest efficiency possible from order to completion of the finished product,” said Matthews.

The haul opens an array of new application possibilities for Crescent, including the capability to offer bound books, tear-out coupons and short-run business cards, as well as speeding up its turnaround time in general.

“A recent job with the new equipment involved a run of 250 156pp A4 landscape brochures, PUR bound with laminated cover,” said Matthews. “This process used to take us a number of days. This time, from going on press to completion, it took four hours.”

With its new capabilities, Crescent is looking to target work with high-end agencies both locally and nationally. Its £1.5m investment was rounded out with the addition of EFI’s Pace MIS and Enfocus’s Switch workflow software to optimise fulfilment.

Based on 929sqm premises, Crescent Press will celebrate 21 years in business this year. It turns over £3m and employs a team of 24 staff.